Santa Larry was featured in People Magazine on December 2, 2016.
Full Article is below, for Original Article: Click Here

For the first time in the Mall of America’s nearly quarter-century history, shoppers are getting their first black Santa.

Larry Jefferson, a retired U.S. Army veteran from Irving, Texas, is joining the Bloomington, Minnesota, mall’s roster of Santa Claus’s for four days this week. He’ll be the first black Santa in the Mall of America’s history.

“This is a long time coming,” Landon Luther, co-owner of the Santa Experience, which has run the intimate photo studio at the mall for 10 years, told the Minneapolis Star-Tribune. “We want Santa to be for everyone, period.” 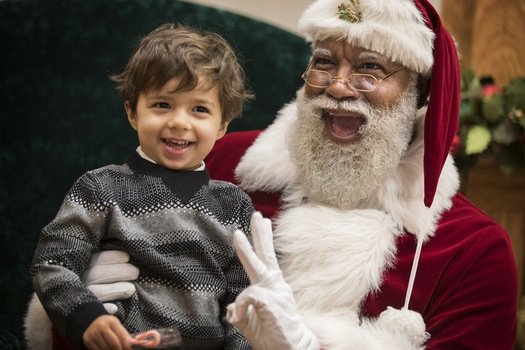 Jefferson is the result of a year-long search Luther started in 2015. He was uncovered at a Santa convention in Branson, Missouri, where he was the only black Santa in attendance. “It was like finding a needle in a haystack,” Luther said. “He considers himself a Santa for all.”

Jefferson’s career as a Santa dates back to his youth: After his father injured his back, he took over the role as a 12-year-old, passing out presents to his brothers and sisters. After returning from service in the Gulf War, Jefferson dressed up for his nephews, who were sick and unable to visit Santa at their local mall.

He then matriculated through a leading Santa school and joined Texas’ Lone Star Santas, a nonprofit with over 350 Santas, Mrs. Clauses and elves who visit disaster-affected areas and donate toys to children in need. (The group has several Hispanic Santas and at least to Jewish members.)

“Kids only see one image of Santa,” Shanene Herbert, director of Project SPIRIT, an after-school program for black children in St. Paul public schools, told the Star-Tribune. “Even though he’s a fictional character, he could be any color, any race, any gender. This is an image of him too.” Herbert was working to fit a meet-and-greet between Santa Larry and her students into his busy schedule. (He’s booked solid over the weekend, and returns to Texas next week.)

Jefferson, meanwhile, has a Christmas wish of his own: He’d like to visit President Obama in the White House. And he remains genially philosophical about his mission: “I’m just a messenger to bring hope, love and peace to girls and boys.”

Are you interested in booking Santa Larry for your next party or event, fill out the info below with all the details and Santa will get back with you.